(EDITOR’S NOTE: This is the third of a three-part series on St. Bonaventure’s Dick Joyce Sports Symposium, held a week ago today at the Quick Center for the Arts/Rigas Family Theater.)

Their input is listed chronologically, as the session unfolded:

MATTHEWS: “We actually have a few different departments in our company that are focused on (women). Samantha Rapoport, our senior director of football development, who played professionally (in a women’s league) has done more than anybody (at the NFL) to get the (women’s) initiative off the ground. She’s working on creating new types of content so that girls 11, 12, 13 years old get the message that they can be players (in women’s leagues), coaches and even referees (at the college or pro level) … that there’s more out there than just being a fan.”

LaPLACA: “The women’s basketball tournament is a huge success story already. When we got the deal to televise that and a bunch of other NCAA sports (15 years ago) … the game itself is so much better than where it was, it’s a joke. There’s so much balance in basketball, which is great to see. But it starts with the game itself. The media and television can only do so much … if the property isn’t strong, it doesn’t matter how much you cover it.

“I believe in repetition … the cumulative effect of marketing and televising. Four or five years ago, we didn’t televise every (women’s NCAA Tournament) game nationally … some of them were regionalized. Now every game is televised nationally on (ESPN) platforms … some of them on ABC. So the cumulative impact of our commitment to that sport has led us to the point where we had almost five million people watch the championship game … the most ever.

“Women’s sports are on a roll. Our sales team is selling women’s sports like crazy. I saw a stat recently that we’ll do 12,400 women’s events this year across ABC, all the ESPN networks and our streaming — for up to 26,000 hours — and there’s a demand for it.

“It’s great, we’re at the vanguard of it … we’ve been involved for a long time … longer than anybody.

“ESPN has the biggest megaphone in sports, and now that it’s reached where it’s reached you’re going to see it go from here (hand at table level) up to here (head high). We’re really committed to it.”

FISHER: “Those (NCAA women’s tournament) rights are coming up in two years and obviously (ESPN) is going to be a vigorous bidder to retain those, along with the other NCAA championships that they now have (rights to). But (women’s sports) are going to get a very healthy increase percentage-wise (in rights fees) like many of the other properties.”

DITOTA: “When I played, we weren’t on TV (early 1980s), so seeing the games on TV is so heartwarming to me to see these full (arenas) and all these televised games, but we still have a long way to go.

“Only last year, the men were going to this palatial place in Indianapolis (for the NCAAs) where they had massive weightlifting facilities and the women had a rack of dumbbells.”

MATTHEWS: One thing I noticed during the (women’s) tournament (on TV) this year as far as social media impact, was when they showed the Top 10 basketball players, men and women in (in popularity), and three of the Top 5 were women. I don’t think five years ago (a woman) would have cracked the Top 10.”

LaPLACA: We announced (last week) that we’re launching, for the first time, a women’s fantasy basketball league and that got a lot of attention and I hope it does very well. And we’re also starting a massive campaign on the WNBA starting next season. We’re doing everything we can to bring them attention because we think they deserve it. 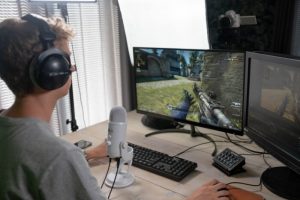 What is the Best Budget Microphone for Streaming?