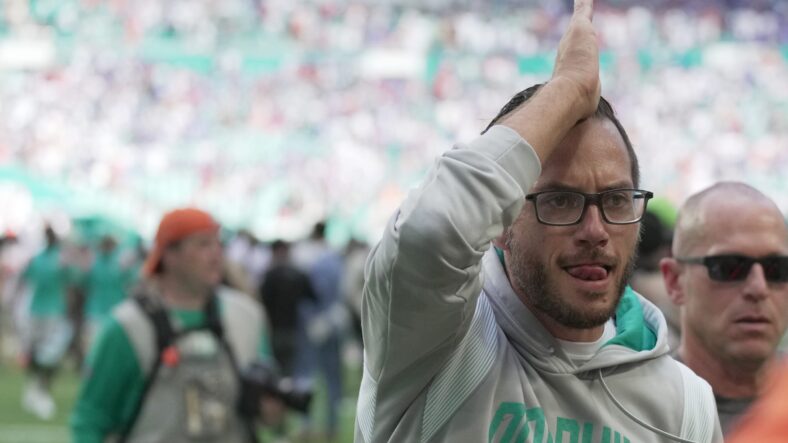 Before the season, I predicted the Vikings would be 4-2 through six games after a loss in Miami. Well, not so fast, as there now appears to be a good opportunity for the Purple to come out of South Beach on Sunday afternoon with a W for a terrific 5-1 start.

That would mean the Vikings could go 6-6 over the remaining 12 games and finish 10-7, which most likely would be good enough for a wild card spot. A 7-5 record would bring a very good chance of winning the division at 12-5, and going 8-4 over that stretch (for a 13-4 regular season mark) probably would grab a top two NFC seed and homefield advantage in the playoffs. That’s how significant a win in Miami could be for Minnesota.

Injury reports can be misleading, but the Vikings certainly are the healthier team heading into this matchup with a Dolphins team that won their first three games—including a victory over Buffalo, perhaps the NFL’s best team. Miami also had a thrilling 42-38 comeback win in Baltimore, but all of their successes came before quarterback Tua Tagovailoa’s concussion in Week 4 in Cincinnati.

Miami had 12 players who either did not practice or were limited on Thursday, including their top two quarterbacks in Tagovailoa and Teddy Bridgewater. Miami Coach Mike McDaniel says Tagovailoa will not play this week, and Bridgewater is going to back up rookie Skylar Thompson who played all but one snap in last week’s loss to the Jets and had two costly turnovers. I think it’s odd if Bridgewater doesn’t start when he’s healthy enough to be the backup this week, but the Vikings won’t argue with McDaniel’s thinking as they’d love to face a rookie QB in his first start rather than the ex-Viking in Bridgewater who would love a shot at beating his former team.

It all adds up to the Vikings being favored on the road against a team with a winning record, a clear reflection of the injury issues in Miami, especially at QB.

Here are my keys to the Vikings beating the Dolphins:

1. A strong pass rush is necessary, including a heavier blitz package than we’ve seen: the Vikings must pressure Thompson if he indeed is the starter. The Vikings are averaging a little over two sacks per game and not enough pressure overall, so it’s time for Za’Darius Smith (3.5 sacks), Danielle Hunter (2 sacks) and Company to crank it up, especially if Armstead is out or not at full strength. Defensive coordinator Ed Donatell should utilize his best blitzers — notably Harrison Smith and Eric Kendricks —extensively in this game.

2. Corners need help on two dynamic receivers: Cam Dantzler is coming off a terrific game, and Patrick Peterson has played well this year, but they’ll have their hands full with two speedsters in Tyreek Hill (38 catches for 524 yards, 2 TDs) and Jaylen Waddle (24 for 404, 3 TDs). Safety help will be needed this week, and Peterson can’t bite on double moves as he has a couple of times this season. Vikings second-round pick Andrew Booth Jr. has been a full go in practice this week, so he can add quality depth in the secondary.

3. Improve red zone defense: the Vikings have allowed a touchdown in all eight red zone possessions for opponents over the past three games, and they’re ranked 29th in this category with 10 TDs allowed in 13 red zone trips thus far. Miami has scored TDs on 10 of 15 red zone opportunities to rank sixth-best in the league.

4. Stop the lulls on offense and defense: the Vikings need to avoid the down stretches that almost cost them against the Saints and Bears the past two weeks, and they must avoid falling behind by two touchdowns early as they did against the Lions. Coach Kevin O’Connell emphasizes consistency throughout games, as was the case against the Packers in the opener and not in the following games.

5. Kirk Cousins play four quarters like he did on the first three drives last week: We’re not asking for a 17 for 17 start again, but the Dolphins rank No. 28 against the pass, which should present a great opportunity for Cousins and the offense to have a good day. If Howard is banged up, Justin Jefferson should be prolific, and even if he’s doubled, he needs to be in motion or in the backfield often to have a better chance to get open. And Dalvin Cook, Adam Thielen, K.J. Osborn, and Irv Smith Jr. should have plenty of opportunities to shine as O’Connell continues to mix the run and pass effectively, especially in end-of-game situations where Cousins and the offense have been clutch (and Cook says he’s never lost in his hometown of Miami going back to his high school and college days).

6. Special teams get back to stellar play: last week was the first down week in this area, and the kicking duo of Greg Joseph and Ryan Wright need to up their game compared to last week (especially Joseph with his 50-plus-yard field goals where he was excellent last year but is only 1 of 5 this season). The coverage units also fell off against the Bears, and a field goal was blocked.

7. Handle the heat and don’t be thinking about bye week plans: the forecast is for mid-80s which will be an adjustment for the Vikings from the cool temps they’ve practiced in this week. Keeping the payers hydrated and rotating the defensive linemen and outside linebackers/edge rushers will be important, along with the running backs and receivers. And I always worried that players would look ahead to the next week’s bye. That’s a challenge for O’Connell to keep the players focused on the task at hand, which I’m confident he’ll handle with the team off to a great start this season.

Jeff’s Prediction: I see a close game despite Miami being banged up. The Vikings catch a break in not having to face Tua, who started the season hot and possibly with other key Dolphins missing or less than 100%. With 5-1 in their sights, the Vikings defense forces a couple of Thompson turnovers, and Cousins and the offense take advantage. Vikings win 27-24 on a late Joseph field goal.

Around the NFL Observations:

1. Several great matchups this week led by Buffalo at Kansas City, Josh Allen vs. Patrick Mahomes in a rematch of their thrilling divisional playoff game last January won by the Chiefs 42-36 in OT. I expect another shootout between the NFL’s top two QBs this season, and this time Allen and the Bills prevail.

2. Dallas at Philadelphia—is this when the NFL’s last unbeaten team, the Eagles, fall to 4-1 Dallas and their excellent defense that has not allowed more than one touchdown in any game this season? I don’t think Cowboys backup QB Cooper Rush—5-0 in his career starts, including four straight this season in relief of Dak Prescott– is going to win in Philly. I see Jalen Hurts making enough plays running and throwing (to his excellent receivers) to get the Sunday night win before the crazed Eagles fans.

3. Jets at Packers—the Vikings would love to see a New York double at the expense of Green Bay after the Giants beat the Pack in London last week. The Jets are improved but not enough to win at Lambeau unless Aaron Rodgers’ thumb, which caused him to miss some practice time, is a real problem come Sunday. The Green Bay defense is too talented to be playing such mediocre ball, and I expect them to stop the Jets and their second-year QB Zach Wilson who played well in the win over Miami last week. Green Bay wins by 7.

4. The NFL needs to get a handle on the concussion issue. I’m all for player safety, but the new rule that forced Bridgewater out of last week’s game when he supposedly passed all concussion tests is an overreaction to the Tua situation that was mishandled by the Dolphins’ coach and medical staff. Then we saw a ridiculous roughing the passer call on Grady Jarrett of Atlanta when he made an innocent takedown of Tom Brady, a penalty that ended the Falcons’ comeback hopes. This, too, was an offshoot of the league’s sensitivity to the Tua concussion issue.

Jeff Diamond is a former Vikings GM, former Tennessee Titans President and was selected NFL Executive of the Year after the Vikings’ 15-1 season in 1998. He now works for the NFL agent group IFA based in Minneapolis and does other sports consulting and media work along with college/corporate speaking. Follow him and direct message him on Twitter– @jeffdiamondnfl