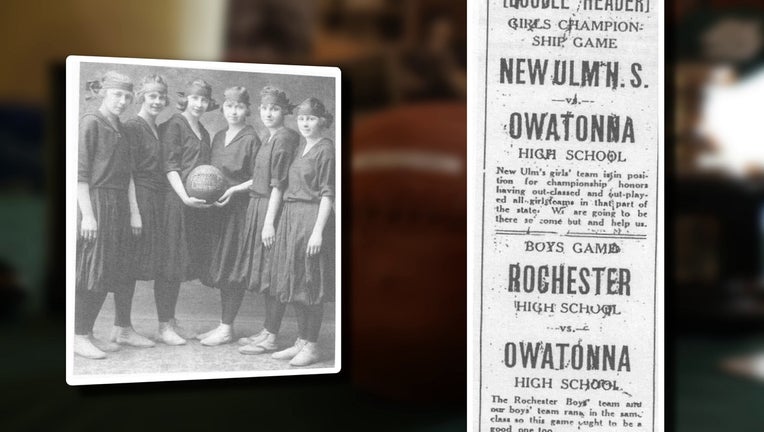 (FOX 9) – With the Women’s Final Four in Minneapolis this weekend and this year being the 50th anniversary of the passage of Title IX, we’re exploring the history of girls and women’s sports in Minnesota and highlighting the people who paved the way for women’s rights to play.

Dorothy McIntyre is one of those pioneers. During her time as a teacher in the 1960s, she made huge strides to create girls’ sports programs in Minnesota, eventually joining the Minnesota State High School League in 1970, where she spearheaded the return of girls sports in schools.

The pioneers that paved the way for girls’ sports in Minnesota

With the Women’s Final Four in Minneapolis this weekend and this year being the 50th anniversary of the passage of Title IX, we’re exploring the history of girls and women’s sports in Minnesota and highlighting the people who paved the way for women’s rights to play.

To understand the impact McIntyre had, we have to look back at this history of girls sports in Minnesota, as highlighted in the book McIntyre co-authored called “Daughters of the Game: First Era of Minnesota Girls High School Basketball.”

“Women played basketball first in Minnesota. We were the beginning,” McIntyre said.

In 1883, just a few years after basketball was invented, it was introduced to girls at Carleton College in Northfield, Minnesota.

“Once they learned it there at Carlton it spread around the entire southern part of the state and pretty soon, it’s all over the state. By 1900, you can find basketball in International Falls.” McIntyre said.

“Sometimes there were girl’s teams before there were boy’s teams in the school,” McIntyre said.

From the late 1800s through the 1930s basketball and swimming, especially on the Iron Range, were two sports girls were welcomed to participate in and were encouraged to be competitive.

In the late 1930s, attitudes about girls in sports started to change. Medical researchers started preaching that competitive sports could be hard on a woman’s body. There was also an effort to get more girls involved with physical activity, and some had the idea that if sports weren’t competitive, more women would participate.

“The medical community was agreeing that indeed the women’s structure is fragile, and we have to protect it,” McIntyre said.

By the early 1940s, nearly all competitive girls’ high school sports programs had been eliminated.

“Everyone remembers being told that ‘well you might not be able to have babies, it might be harmful to your nervous system.’ They called it ‘too much noise and bands and cheering might overstimulate a young women’s nervous system,’” McIntyre said.

The women who had played competitive sports for their high schools in the early 1900s were now raising daughters who did not have the opportunity to compete. It would be decades before there was a resurgence of girls’ sports in Minnesota.

This is where Dorothy McIntyre’s role in Minnesota sports begins. In the early 1960s, she was working as a teacher at Eden Prairie High School and was running the Girls Recreation Association, a club where girls could participate in sports and physical activity for fun, no games or competitions.

“We had a great deal of fun, but there was always the knock on the door, and they would say ‘Ms. McIntyre, why can’t we do what the boys do? I love to play basketball or gymnastics why can’t we go out and do those things?’” McIntyre said.

Looking for a solution, McIntyre went to her principal with a plan: let the girls travel to nearby schools to participate in unofficial scrimmages, as the boy’s team did. Her principal told her, if she could learn to drive a bus she could travel with the girls in her club.

“By the next Thursday I went downtown took the test, passed it, came back, and said to the principal ‘here’s my license,’” McIntyre said.

After that, McIntyre and the girls in her program hit the road showing other schools that girls did have a place in sports.

“Believe me, we burned a lot of gas traveling all over the state, not just the metro area. We were in Bemidji and St. Cloud because we had other people we needed to teach about why girls should be able to do this,” McIntyre said. “When we did that then we started opening doors here and there and before I knew it I became a voice for this advocacy for opening doors for girls.”

By the late 1960s, McIntyre found an ally in a high place: the director of Minnesota State High School League. She says, he supported her vision to bring competitive sports back to girls in high school.

“We wrote up the bylaws for girl’s athletics and in 1968. We presented the bylaw proposals to the delegate assembly of the Minnesota State High School League and there were 32 men in that group and they would determine the fate of girls sports in Minnesota,” McIntyre said.

The league voted in favor of bringing back high school sports 32 to 0, solidifying what McIntyre knew to be true: Minnesotans were ready to let girls play sports again.

“Overall, the schools and the parents and the communities, I don’t think, really wanted to have their girls sitting up in the bleachers either but everybody else was doing it how are you going to change something everybody else is doing?” McIntyre said.

By 1970, McIntyre was doing just that. She joined the Minnesota State High School League and, before Title IX was passed at a federal level, started implementing girls’ sports in Minnesota high schools.

“We had eight state tournaments by 1978. That’s pretty fast considering we had a standing start with none in 1970,” McIntyre said.

Girls in Minnesota now have access to 27 co-curricular activities thanks, in part, to Title IX requirements, but mainly thanks to the people who continued fighting to let girls participate in sports programs as we know them today.

“When you know your history, you won’t repeat the same mistakes again, and we are never going to allow the opportunities for girls and women to be taken away. Never again,” McIntyre said.

Ali vs. Frazier? No, Tkachuk vs. Trouba: Hockey fans in awe of captains brawl